On Wednesday, 24 Feb 2016, Facebook introduced Like button Emoji reactions. Now, if you hover your mouse pointer over ‘Like‘ button on your desktop computer or long tap on ‘Like‘ button on your smartphone, you will see ‘Emoji Reactions‘. You can choose anyone of them to show your true feeling about that post.

Facebook said it wanted to give users more authentic ways to quickly and easily respond to posts, whether they are sad, serious, funny or happy. Before emoji “Reactions,” users were often put in the awkward position of resorting to “liking” a post about a death or one that expressed frustration or disappointment, without distinction from how one would “Like” an engagement photo. “Reactions” should solve this problem. 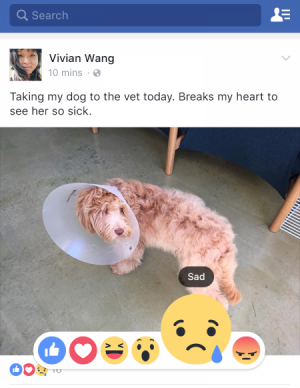 “We heard from people that they wanted more ways to express themselves on Facebook,” said Facebook product manager Sammi Krug. “When people come to Facebook, they share all kinds of different things, things that make them sad, things that make them happy, thought-provoking, angry. We kept hearing from people that they didn’t have a way to express empathy.”

Facebook was previously planning to launch ‘Dislike Button‘ and opposite to ‘Like‘ button. But ‘Emoji Reactions’ are better substitute for dislike button.

“As you can see, it’s not a ‘dislike’ button, though we hope it addresses the spirit of this request more broadly,” Facebook’s chief of product, Chris Cox, said in a Facebook post when the company announced its test of  ”Reactions” in October. “We studied which comments and reactions are most commonly and universally expressed across Facebook, then worked to design an experience around them that was elegant and fun.” How to Enable End-to-End Encryption on Zoom