We have worked hard to prepare the list of changes made to Windows 10. This is a long list of updates and changes, you should really go through this-

1. Fingerprint Authentication to Apps and Websites through Windows Hello

Microsoft has removed Windows 10’s Password Sharing feature of Wi-Fi sense. This feature allowed you to share your Network and their passwords with your Contacts on Facebook, Outlook and Skype. Wi-Fi sense is not completely removed, but it no longer connects you to private Wi-Fi networks and doesn’t offer to share your password with others.

Reason behind failure of this feaure is that Microsoft never explained it properly to the users. Microsoft says only few people used this feature, so it wasn’t worth keeping it.

Anniversary update brings more advertisements in Start Menu. “Suggested apps” shown earlier in Start Menu were 5 and now increased to 10. Microsoft has also reduced number of App tiles shown in Start Menu from 17 to 12.
You can easily uninstall or unpin the tile if it is not downloaded yet and that advertisement will be gone forever. But new Windows 10 PCs are going to have more crowded Start Menu than before. 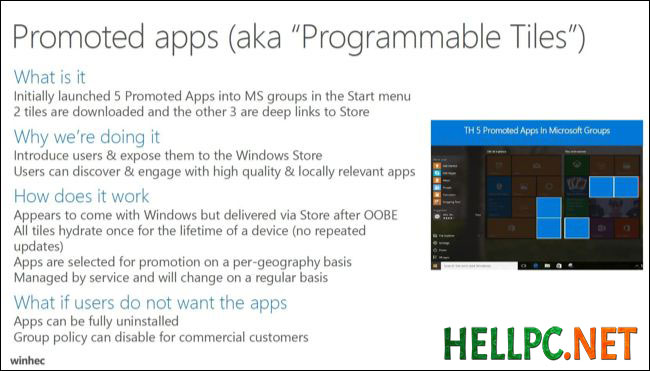 4. Skype Universal App is Back

If your Windows 10 PC isn’t running as expected, you can give it a fresh start by using Recovery Options. You can use “Reset your PC” option and your PC will be reset to Manufacturer’s Default settings. This means all the bloatware that Manufacturer installed on your PC will be back.

In this new “Anniversary Update” you can “Reset you PC” smartly. You can uninstall those bloatware while resetting your PC and get a brand new Windows 10 PC without the junk provided by the manufacturer.

You can also set the Taskbar to hide automatically while in “Tablet Mode“. By hiding Taskbar your entire screen will be reserved for currently opened app. You can swipe up from the bottom to show the hidden Taskbar.

Windows 10 added another new feature to it’s “Anniversary Update“, i.e. you can associate apps with Websites. It means you can open a website directly in it’s official application instead of opening it in Microsoft Edge.

For example if you are opening Facebook.com on Microsoft Edge, it will automatically open Facebook.com it in Facebook App instead.

9. Connect your phone to your PC without Cable

This application enables your phone to “Project to PC“. Even PCs with Miracast can also use this feature(Connect Application) to share their screens with other PCs.

Biggest update in Windows 10’s “Anniversary Update” is Cortana’s Smartness. The new Cortana makes smarter suggestions for you. If you received email confirmation of flight details, it will automatically add them to calendar. If you promised someone to send him a PowerPoint presentation in an email, Cortana will know, and remind you to send that PowerPoint presentation later on.

If you add an appointment to your calendar, Cortana will check if that appointment overlaps with another one, and asks you to re-schedule one of these overlapping appointments. These are just examples of Cortana’s smartness. It can manage all your tasks, appointments, meeting, outing and many more. Cortana has become truly personal digital assistant without which you can’t enjoy Windows 10 fully.